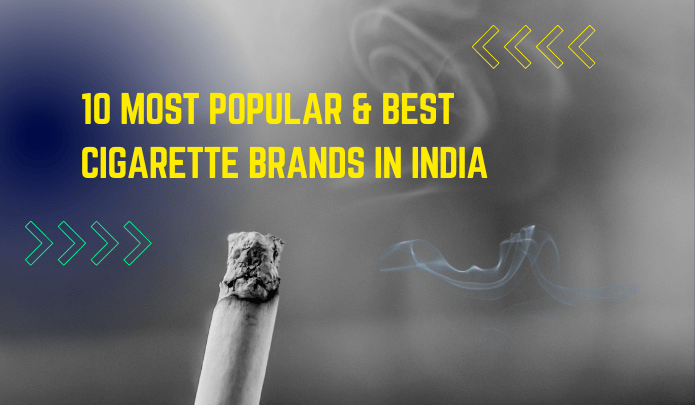 So, You are searching for the best cigarette Brands in India.

In this article, we have listed the names top 10 Indian cigarette brands in India.

It’s no longer a mystery Still, I would want to tell you that Smoking is Harmful to your Health!

Listening to the Term “cigarette” the first thing that strikes me is that a caution warning is printed on every cigarette box.

Although smoking is harmful to our health, Still people are inclined towards it and cannot get rid of it due to the addictive property of nicotine.

Cigarette smoking and using tobacco products of any sort can severely damage your health and cause dreadful diseases such as mouth, throat, and lung cancer, among others.

Now, listen to this very carefully:

This article is therefore not aimed at promoting cigarette brands or smoking.

Rather, it is meant to serve as a guide for millions of foreign nationals who visit India every year and look for top local cigarette brands to carry back home as gifts or for personal use. Or for those who just want to know more about the best cigarette brands in India.

Large-scale production of cigarettes in India began as late as 1910.

On October 24, 1910, The Imperial Tobacco Company of India, the country’s first indigenous and large-scale cigarette manufacturer was established.

The cigarette made by this company were meant for supplies to British officers working on the Indian subcontinent and exports to select neighbouring countries.

A year later, NTC Industries, based in Kolkata opened a factory and began manufacturing its brand, Regent.

This company is also listed on the Indian stock markets and makes some brand that is available in select markets of the country.

Another entrant in the cigarette market was Mumbai-based Golden Tobacco Ltd, with factories located in the Vile Parle (West) suburb of the metropolis.

The year 1936 saw the entry of another major cigarette manufacturer in India- Godfrey Phillips.

Today, The Imperial Tobacco Company of India is known by its acronym, ITC while Vazir Sultan Tobacco is a company listed on the Indian stock exchanges and has collaborated with global cigarette major, British American Tobacco.

Together, they manufacture indigenous Indian brands, including some that existed since these companies began production. Here we look at the Best cigarette brands in India.

Gold Flake is one of the most popular cigarette brands in India. This international brand, owned by ITC Limited, has been serving Indian smokers for over a century.

With a strong presence in both urban and rural markets, this iconic brand has become a favourite among millions of people across the country.

The Imperial Tobacco Co of India began manufacturing this brand at its factories near Kolkata.

It is a brand manufactured by Golden Tobacco Co Ltd. Gold Flake Kings holds some 17.9 per cent of the Indian cigarette brand market while the Lights variant holds an estimated 13.4 per cent of the market slice.

This classic Indian brand stands out for its quality homegrown tobacco that gives every puff an intense yet smooth flavour.

The rich aroma and premium taste make it all the more special as it stands apart from other cigarette brands in India. In addition to this, Gold Flake also features eye-catching packaging that adds to its appeal and popularity with smokers worldwide.

Four Square is also one of the oldest existing and best brands of cigarettes in India. It is available across the country.

Availability may differ according to location. FourSquare is the flagship brand of Godfrey Phillips India Ltd.

Over the years, it has become one of the leading tobacco companies in India and is known for producing high-quality cigarettes at affordable prices.

In addition to offering several varieties of cigarettes under the Four Square brand, they also manufacture other products such as cigars and chewing tobacco.

Charminar is the leading brand of non-filter cigarettes in India and has held sway in its segment for decades.

It is the flagship brand of Vazir Sultan Tobacco and draws its name from an eponymous historical monument in Hyderabad.

In recent years, VST is trying to revive the brand and give it a premium image to combat stiff competition from foreign and other local brands.

Introduced in India as Wills Navy Cut, this was the premier brand of WD & HO Wills. The brand is now known only as Navy Cut and is made in India by ITC Ltd.

However, the two later variants were discontinued in view of the rising popularity of foreign brands made in India.

It retains a strong position in the ‘king’ sized premium cigarettes market of India. Classic and Classic Mild are also exported by ITC Ltd.

Classic Mild holds about 19 per cent of the market share for light cigarettes.

Cavender’s was initially a non-filter cigarette popular in coastal regions of India. It is a brand from Godfrey Phillips India Ltd.

In recent years though, Cavender’s brand has undergone a total facelift.

Launched in the early 1980s, Charms was the premium and filter-tipped version of Charminar. It is a brand owned by Vazir Sultan Tobacco Ltd.

Charms were targeted at younger generation smokers during the launch, with the packet resembling blue denim which was a fad in those years.

Charms are available to date in various states of India.

For decades, Panama has held sway over the non-filter cigarette market of India. Panama is the flagship brand of Golden Tobacco Ltd.

It is now available in seven variants- an unmatched line for any indigenous Indian brand.

Another brand still extant in India for over a century is Bristol.

In fact, in some parts of southern India, the ‘Bristol’ is synonymous with a cigarette: People ask for a vendor for a ‘Bristol’ of any brand.

Bristol owes its name to the eponymous city in England, where it was manufactured by WD & HO Wills before the brand was passed on to The Imperial Tobacco Company of India.

Chancellor was the first filter-tipped brand in India to be launched in dark brown rice-paper tubing instead of the conventional white-coloured ones used by other brands.

Chancellor is a brand of Golden Tobacco Ltd. Nowadays you can also get Chancellor Blue in select markets of India. As the name suggests, Chancellor Blue comes with blue-coloured rice-paper tubing.

In the 1960s, Scissors was a very low-priced brand and was available only in the non-filter variety. In the mid-2000s, its manufacturer ITC Ltd upgraded the brand for the export market.

It is available in various parts of the world, especially in the six countries of the Arabian Gulf region and is a favourite among expatriate Asian communities there.

Over the years, multinational companies engaged in cigarette manufacture have entered India either as Joint Ventures or as associates with local companies.

These include Philip Morris, British American Tobacco, and Japan Tobacco Co Ltd, among others. Consequently, Indian-made varieties of their topmost Cigarette brands are available in the local market.

There are top foreign Cigarette brands that are popular in India too.

According to a report released by the Global Adult Tobacco Survey and India’s Ministry of Health and Family Welfare, only four per cent of India’s adult population smokes cigarettes.

Though India is home to about 17 per cent of the world’s human population, it accounts for less than two per cent of smokers on this planet.

This translates as India having the lowest number of smokers for any country on Earth.

Meanwhile, there is also a huge illegal and irregular market for cigarettes in India.

This is the form of counterfeited cigarettes of major brands that are manufactured and sold by small illegal units as well as fakes that enter the country through its land and maritime frontiers.

Earlier, the bulk of this black market was concentrated in border areas with these countries.

However, illegally imported cigarettes are now available openly in every major city and town in India, though rates may vary according to location.

Most cigarettes smuggled into India are from the eastern corridors of the country.

Illegally imported and fake cigarettes flourish due to high taxes imposed by the Indian government on those manufactured in India or imported under proper licenses.

Consequently, a ‘decline’ in cigarette sales of a whopping 10 per cent has been observed, says the website of The Tobacco Institute of India (TTII).

Indians spend a whopping Rs.350 billion on smoking every year, despite only four per cent of the country’s population being smokers.

This estimate is not surprising since residents of urban areas patronize pricey cigarettes- those costing Rs.10 and more per stick.

This is because of the general notion that expensive, low tar-low nicotine cigarettes are safer than their stronger counterparts.

Additionally, there is also a surge in the number of females, especially among the younger generation, who smoke cigarettes regularly.

This phenomenon is caused by fast-vanishing taboos related to smoking by women and the glamour attached to the vice by movies.

Bollywood movies since decades have depicted heroes and heroines smoking and the trend continues.

Despite strict rules related to smoking in public places and penalties, cigarette smoking in India is on the rise, though figures may reveal otherwise.

This augurs boom-time for top cigarette manufacturers in India.

Indians had mastered smoking tobacco much before western colonials set foot on the Indian subcontinent.

They smoked flakes of dried tobacco rolled in jackfruit or other leaves and called ‘bidi’.

In parts of India where tobacco grew or was farmed, people rolled the leaves into cigars of various forms.

Modern-day cigarettes were introduced to India somewhere between the 16th and 17th Centuries.

The earliest cigarette brands to arrive on the shores of India were imported from England and were brought by soldiers of the British East India Company.

Which Cigarette is best in India?

There is no one “best” cigarette in India. Different brands offer different varieties of cigarettes, so it really depends on personal preference. Some popular brands in India are Wills, Gold Flake, Classic, and Insignia. You can try out different brands to find the one that suits you best.

Which is the Most Expensive Cigarette in India?

The most expensive cigarette in India is the Davidoff Gold, which has a price of Rs. 600 for a pack of 20 cigarettes. It is considered to be one of the finest and most luxurious cigarette brands available in India.

Which is the Cheapest Cigarette in India?

The cheapest cigarettes in India are the local brands such as Wills, Gold Flake and Classic. These cigarettes are usually sold at a lower price than international brands like Marlboro and Camel. You can also find cheaper options at local shops or online retailers.

1 thought on “10 Most Popular & Best Cigarette Brands in India”