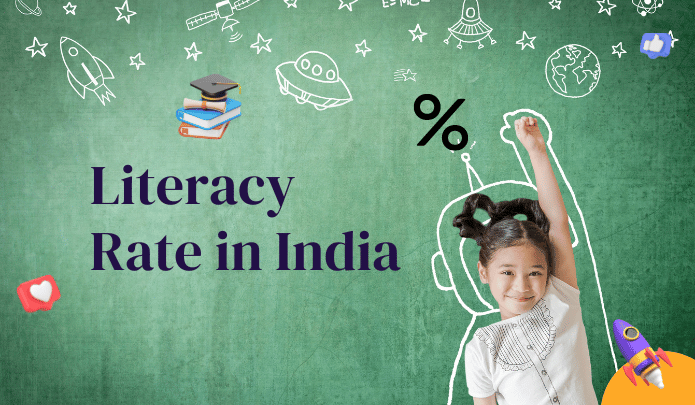 Literacy Rate in India: India is one of the largest, most populous, and most diverse countries in the world. According to UNESCO, India has a literacy rate of 79%.

This means that nearly three-quarters of the Indian population can read and write. However, there is still work to be done to improve literacy rates throughout India.

There are many reasons why the literacy rate in India is low. For example, many people who can read and write do not have access to education.

In recent years, India has made significant strides in literacy. With its vast population and rising number of citizens with access to education, the country is projected to have a very high literacy rate by 2022.

Over time, the literacy rate in India has gone through many shifts and changes. In 1947, when India gained independence from Britain, only 12% of its population was literate.

Since then, there has been a steady increase in educational opportunities for citizens, resulting in increased enrollment rates for both primary and secondary schools. By 2002-03, the literacy rate had grown to 61%.

By 2019-2022, it is estimated that the literacy rate will reach 81%, indicating a significant improvement compared to 47 years ago.

Literacy is the ability to read and write. It involves knowledge of language and understanding, interpreting, and communicating ideas through written words.

Literacy can refer to a person’s competence in specific areas such as math, science, or technology. It is a vital skill for success in today’s world.

Many people don’t realize how important literacy is. Literacy isn’t just something that is needed to read and write. It is a skill that can be used in many different ways.

Factors of Low Literacy in India

Low literacy rates in India are a result of a variety of factors. These include poverty, lack of education, and poor health conditions. India also has a very large population, which makes it difficult to provide everyone with access to education and literacy.

Literacy rates can be determined by surveying a population and asking them questions about their reading and writing abilities. This can be done through a questionnaire or an interview.

The data from the survey can then be used to calculate the literacy rate for that population.

States with the Highest Literacy Rate in India

The reason for the successive literacy rate in Kerela is that it has always kept education as a top priority.

In 2007, total enrollment in elementary education was a hundred percent, and due to this, they completed 99% of schools in villages at just a 2-kilometre distance. The highest literate district in Kerala is Kottayam at 97.4percentage, which is even better than the overall Indian literacy rate.

The lowest literate district in Kerala is Wayanad 87.5 percent. In 1980, the government of Kerala started a campaign for total literacy in Ernakulam district, which was successfully replicated in other districts of the state.

The state launched Kerala State Literacy Campaign for the literacy program to enhance its effect.

Special attention was given to areas that needed more progress, like schools and an understanding of the importance of education. For the successful execution of the state’s literacy program, officials and volunteers were also involved.

Delhi is the capital of India. The chief minister of Delhi is Shri Arvind Kejriwal. Delhi is of great historical significance as a commercial, transport, and cultural hub, as well as the political center of India.

According to legend, the city was named for Raja Dhilu, a king who reigned in the region in the 1st century BCE.

It holds the top second rank in terms of literacy among other states of India. The literacy rate of Delhi is 86.2%.

States with the lowest literacy rate in India

Bihar is the lowest literate state in India among all the states. The census of Bihar literacy changed from 2001 to 2011 with a big jump from 47 percent to 63.8%.

Hence, there was a significant increase in the literacy rate of Bihar from 2001 to 2011. The government launched many programs to boost literacy rates, but due to many hurdles, it can’t succeed.

The areas where the most work is done and still has to do is poverty, social divisions, and caste discrimination. also are some of the hurdles that affect the literacy programs in Bihar.

Because of poverty, the students cannot afford to buy textbooks and stationery things and are forced to work on the farms. Teacher education is also a major issue in Bihar.

Some of the teachers are not capable of delivering well-educated sessions to students.

The highest literacy rate district in Bihar is Rohtas at 73.5 %.

The lowest literacy rate district in Bihar is Purnia, with 51.08%.

Literacy rate in Jammu and Kashmir:

Jammu and Kashmir is a region administered by India as a union territory and consists of the southern portion of the larger Kashmir region, which has been the subject of a dispute between India and Pakistan since 1947 and India and China since 1962.

Kashmir is also well known for its apple farming. The literacy rate of Jammu Kashmir is 68.7%.

Punjab is a state in the northwest region of India and is one of the most fertile regions. The name Punjab is derived from two words Punj means five, and Aab means water which means land of five rivers.

The five rivers are Sutlej, Beas, Ravi, Chenab, and Jhelum. Only Sutlej, Ravi, and Beas flow in today’s Punjab. The other two rivers are now in a divided part of Punjab, Pakistan.

The Punjab State divides into three regions: Majha, Doaba, and Malwa. Punjab has a literacy rate of 79.5% in 2022.

Literacy rate in UP

It is the fourth largest state in India. It is well known for its religious culture and popularity. The capital of UP is Lucknow.

Most of the religious and historical monuments are here, due to which people from all over the world travel here to explore.

The literacy rate in India is a significant concern. Many initiatives are underway to improve literacy rates, but much work is still to be done.

Everyone deserves the opportunity to learn and grow, and we must continue working together to make this a reality for all of India’s citizens.

The article gives information on literacy, the literacy rate, and the rank Of India state-wise.

Which state has the highest literacy rate in India?

Kerala has the highest literacy rate in India, with 94.5%. This is largely due to the state’s investment in education and its focus on social welfare.

Which state has the lowest literacy rate in India

According to the 2011 Census, the state with the lowest literacy rate in India is Bihar, with a literacy rate of just 63.8%. This is likely because Bihar is one of the poorest states in India, with a poverty rate of nearly 50%.

What is the female literacy rate in India?

The female literacy rate in India is currently at 65.46%. This means that out of every 100 Indian women, only 65 are literate. There is still a lot of work to achieve gender parity in education.